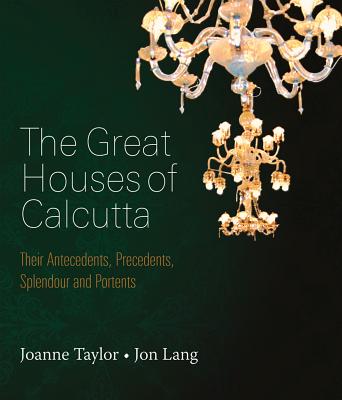 Their Antecedents, Precedents, Splendour and Portents

The mansions of North Kolkata described in Great Houses of Calcutta were built by the cream of the indigenous elite during the city's colonial era. Some exceptions apart, these are now largely forlorn reminders of the ways of life, aspirations and aesthetic values of the wealthy Indian land owners, bankers and traders who flourished during the heyday of the city's colonial era of the eighteenth and nineteenth centuries. The houses are an important part of the urban and architectural history of Kolkata and are past representatives of the ongoing debate over what it means to be modern while representing a living culture in built form. Taking off from Joanne Taylor's widely acclaimed award-winning book The Forgotten Palaces of Calcutta and drawing from her thesis The Great Houses of Kolkata, 1750-2006, this book is a more comprehensive endeavor bringing in Joanne Taylor's first hand experiences and research in Kolkata and Jon Lang's knowledge of the broader context of architectural history and the attempts to display contemporary design attitudes in built form, not only in today's changing world but also during India's colonial and post-colonial eras. Contents: Foreword and Preface; Prologue: The Symbolic Function of Buildings; Part I: Calcutta and The Great Families- Calcutta-The Great Families of Calcutta; Part II: Architectural Antecedents and Potential Precedents-The Indigenous Architectures of Bengal; The Contemporary Architecture and Ways of Life of British Calcutta; Part III: The Great Houses; The Generic Technical and Cultural Nature of the Mansions and Palaces of Bengal; Twelve Great Houses of Calcutta; Part IV: Today and Looking Ahead- Evolving Histories: the Great Houses in the Twentieth and Twenty-first Centuries; The Future?.

Joanne Taylor born in Sydney holds a bachelor's degree in art history and theory and English literature from the University of Sydney. Her undergraduate studies on the history of India led to her post-graduate research and the award of a master's degree from the University of New South Wales for her thesis, The Great Houses of Kolkata, 1750-2006. She has traveled widely in India particularly in Kolkata and Bengal. An accomplished photographer she is the author of the widely praised award winning book The Forgotten Palaces of Calcutta. Jon Lang is an emeritus professor at the University of New South Wales where he headed the School of Architecture. Born in Kolkata, he received his early education in the city and in Kalimpong. He has a bachelor s degree in architecture from the University of the Witwatersrand and a doctorate from Cornell University. He taught in the urban design program at the University of Pennsylvania before settling in Australia. This book is the fourth that he has written or co-authored on architecture in India. In 2010 he received the Reed and Mallik Medal from the Institution of Civil Engineers in London.
Loading...
or
Not Currently Available for Direct Purchase