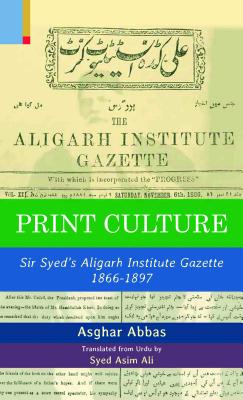 This book is based on a critical study of The Aligarh Institute Gazette covering the period 1866 97, a phase when India was slowly transiting to the modern age, with the spread of new political, social, educational and religious ideas. Numerous social movements too, were gathering steam during this period to reform the Indian society. Sir Syed Ahmed Khan, the founder of The Aligarh Institute Gazette, fought against obscurantist ideas and persuaded the Indian people to accept the impending changes. Print Culture: Sir Syed's Aligarh Institute Gazette begins with a brief account of the life and achievements of Sir Syed. It goes on to examine the role of the Scientific Society, that remained active from 1864 to 1884. During this period the Scientific Society held

regular meetings highlighting the need for social, educational and political reforms and attempted to develop a scientific temperament amongst the people. The Aligarh Institute Gazette was an organ of the Scientific Society, and very soon it became popular throughout the subcontinent. An important feature of the Gazette was its editorials penned by Sir Syed himself on social and educational reforms.