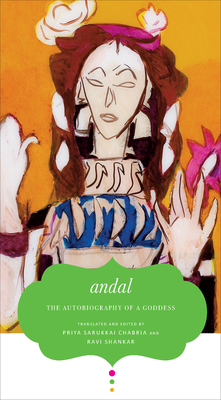 The Autobiography of a Goddess

Eighth century Tamil poet and founding saint Andal is believed to have been found as a baby underneath a holy basil plant in the temple garden of Srivilliputhur. As a young woman she fell deeply in love with Lord Vishnu, composing fervent poems and songs in his honor and, according to custom, eventually marrying the god himself. The Autobiography of a Goddess is Andal’s entire corpus, composed before her marriage to Vishnu, and it cements her status as the South Indian corollary to Mirabai, the saint and devotee of Sri Krishna. The collection includes the Thiruppavai, a song still popular in congregational worship, thirty pasuram (stanzas) sung before Lord Vishnu, and the less-translated, rapturously erotic Nacchiyar Thirumoli.

Priya Sarukkai Chabria and Ravi Shankar serve as master translators for the volume, employing a radical new method for that revitalizes classical and spiritual verse by shifting it into a new contemporary poetic idiom in English. Many of Andal’s pieces are translated collaboratively, giving readers multiple perspectives on the rich sonic and philosophical complexity of classical Tamil. Andal: The Autobiography of a Goddess is a powerful expression of female sexuality in the Indian spiritual tradition—one newly available to a general readership in this fresh new translation.


Praise For The Autobiography of a Goddess…

“Reworked and translated by Priya Sarukkai Chabria and Ravi Shankar, Autobiography of a Goddess is a collection of the poems and songs of a ninth-century Indian poet. They are centered on her love for Lord Vishnu, whom she courted and eventually married. Using parallel translations of almost every poem from both editors, this compilation addresses the richness of Old Tamil and the difficulty of its translation while retaining the integrity of the original text.”
— World Literature Today

Ravi Shankar is an award-winning poet, author, translator, and founding editor of Drunken Boat. His many books include Language for a New Century, Deepening Groove, and What Else Could it Be.
Loading...
or
Not Currently Available for Direct Purchase