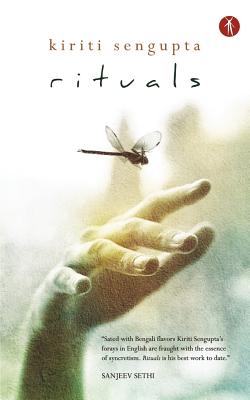 Rituals is a remarkable collection of poems by renowned poet, translator, editor, and critic Kiriti Sengupta. This latest book explores the panoply of human experience and elucidates the meanings and rhythms of a mature poetic life. "Customs are like meditation," writes Sengupta as he weaves religious liturgy and the opera of gods as the quotidian backdrop of married life and experiences with his son. Not just interested in the matter of appearances as a poet, he delves into questions of what makes an Indian and how Hindu goddesses can strengthen willpower and remove the 'venom' from life. The mythological and the quotidian blend and inform one another, the goddess appears in iterations of the wife, the daughter, the mother. These poems also talk about Monsoon and Muri as snacks that overlap with dialogues of intellect and Sanskrit. Themes such as nakedness and nudity are explored from the point of view of youth and maturity. Striking imagery marks the passing of time on everyday objects where the speaker can now stop and observe the beauty of human traces on life, "My tired eyes uncover the kohl of night." The speaker is not only interested in contemplating the beauty of everyday moments but also faces his reader with the violence of the modern world, in the poem "The Untold Saga" the violence of a mythological world mirrors the violence on women practiced often in the 21st century, offering a powerful statement on the untimely death of Nirbhaya in 2012. These poems are also meditations on our place in the world as humans, the vastness of the Earth compared to our frail bodies with the invitation to reconnect to the natural world.