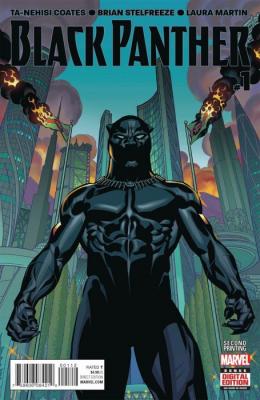 A new era for the Black Panther starts here! Written by MacArthur Genius and National Book Award winner TA-NEHISI COATES (Between the World and Me) and illustrated by living legend BRIAN STELFREEZE, “A Nation Under Our Feet” is a story about dramatic upheaval in Wakanda and the Black Panther’s struggle to do right by his people as their ruler. The indomitable will of Wakanda -- the famed African nation known for its vast wealth, advanced technology and warrior traditions -- has long been reflected in the will of its monarchs, the Black Panthers. But now the current Black Panther, T’Challa, finds that will tested by a superhuman terrorist group called The People that has sparked a violent uprising among the citizens of Wakanda. T’Challa knows the country must change to survive -- the question is, will the Black Panther survive the change?

Ta-Nehisi Coates is a former staff writer at "The Village Voice" and "Time "and has contributed to "The New York Times Magazine," "The Atlantic, O, "and numerous other publications. He lives in New York City.
Loading...
or
Not Currently Available for Direct Purchase