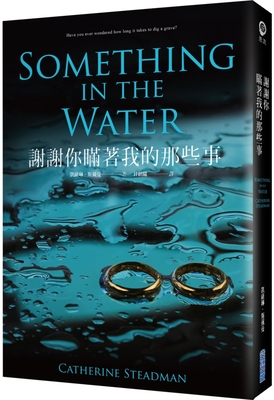 Something in the Water

#1 NEW YORK TIMES BESTSELLER - A shocking discovery on a honeymoon in paradise changes the lives of a picture-perfect couple in this taut psychological thriller debut--for readers of Ruth Ware, Paula Hawkins, and Shari Lapena. "A psychological thriller that captivated me from page one. What unfolds makes for a wild, page-turning ride It's the perfect beach read "--Reese Witherspoon (Reese's Book Club x Hello Sunshine book pick) NAMED ONE OF THE BEST BOOKS OF THE YEAR BY GLAMOUR AND NEWSWEEK - FINALIST FOR THE ITW THRILLER AWARD If you could make one simple choice that would change your life forever, would you? Erin is a documentary filmmaker on the brink of a professional breakthrough, Mark a handsome investment banker with big plans. Passionately in love, they embark on a dream honeymoon to the tropical island of Bora Bora, where they enjoy the sun, the sand, and each other. Then, while scuba diving in the crystal blue sea, they find something in the water. . . . Could the life of your dreams be the stuff of nightmares? Suddenly the newlyweds must make a dangerous choice: to speak out or to protect their secret. After all, if no one else knows, who would be hurt? Their decision will trigger a devastating chain of events. . . . Have you ever wondered how long it takes to dig a grave? Wonder no longer. Catherine Steadman's enthralling voice shines throughout this spellbinding debut novel. With piercing insight and fascinating twists, Something in the Water challenges the reader to confront the hopes we desperately cling to, the ideals we're tempted to abandon, and the perfect lies we tell ourselves. Praise for Something in the Water "Superbly written, clever and gripping."--B. A. Paris, New York Times bestselling author of Behind Closed Doors

Catherine Steadman is an actress and writer based in North London, UK. She has appeared in leading roles on British television as well as on stage in the West End. In 2016 she was nominated for a Laurence Olivier Award for Best Actress in a Supporting Role for her performance in Oppenheimer. She is best known in the United States for her role as Mabel Lane Fox in Downton Abbey. She grew up in the New Forest, UK, and lives with a small dog and an average-sized man. Something in the Water is her first novel.
Loading...
or
Not Currently Available for Direct Purchase