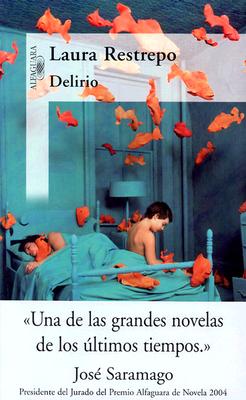 Aguilar returns home after a short business trip only to find that his wife, Agustina, has gone crazy. Having no idea what could have happened during his absence, and hoping to help her overcome this crisis, he begins to investigate, what he discovers are deep and disturbing facts hidden in the past of the woman he loves. Delirio is a story of love and madness, mysteries and secrets in the midst of the breakdown of Colombian society. The author shows an uncommon narrative energy, in which the suspense is held until a hopeful end that closes a beautiful novel. Wonderfully constructed, magnificently narrated and brilliantly developed.