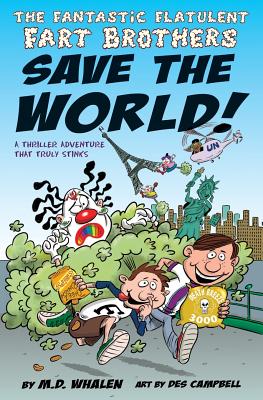 The Fantastic Flatulent Fart Brothers Save the World!

One nutty clown trying to take over the planet.

Can kid fart power save the world's butt?

Willy and Peter just want to sit around watching TV and farting. So it's pretty annoying when they're out shopping for their sister's birthday, and end up captured by mad clowns who want to take over the world.

Worse, their red-nosed leader has a putrid plan to wipe out civilization with Weapons of Mass Flatulation

From their bouncy castle dungeon to the White House itself, can Willy and Peter outsmart--and out-fart--the evil clowns? Can they save humanity from ex-stink-tion? And still get home in time for their sister's birthday?

They're the smelliest new heroes on the block, in their own butt-blasting adventure series for kids ages 8 to 12. Even the most reluctant readers will laugh their underpants off

Please note that this is the American spelling edition.