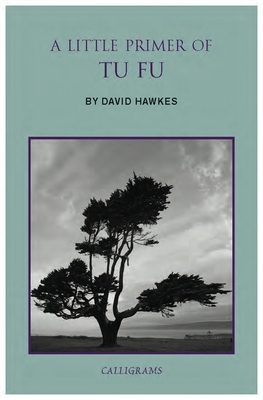 A Little Primer of Tu Fu

The deepest and most varied of the Tang Dynasty poets, Tu Fu (Du Fu) is, in the words of David Hinton, the “first complete poetic sensibility in Chinese literature.” Tu Fu merged the public and the private, often in the same poem, as his subjects ranged from the horrors of war to the delights of friendship, from closely observed landscapes to remembered dreams, from the evocation of historical moments to a wry lament over his own thinning hair.

Although Tu Fu has been translated often, and often brilliantly, David Hawkes’s classic study, first published in 1967, is the only book that demonstrates in depth how his poems were written. Hawkes presents thirty-five poems in the original Chinese, with a pinyin transliteration, a character-by-character translation, and a commentary on the subject, the form, the historical background, and the individual lines. There is no other book quite like it for any language: a nuts-and-bolts account of how Chinese poems in general, and specifically the poems of one of the world’s greatest poets, are constructed. It’s an irresistible challenge for readers to invent their own translations.

Praise For A Little Primer of Tu Fu…

"Every Anglophone reader interested in the working mechanics behind Chinese poetry will find these texts to be endless resources worth returning to again and again...Although aimed as being introductory in nature, both A Little Primer of Tu Fu and Chinese Poetic Writing nonetheless forefront the presentation of the poem in Chinese characters, clearly emphasizing the importance of the original language in fully understanding any poetry." —Rain Taxi

Tu Fu (712–770) lived during a time when the Tang Dynasty was wracked by war, mass dislocation, and starvation. A minor bureaucrat, a refugee, and a political exile, he wavered between the Confucian ideal of serving his country and the Taoist dream of a hermitage in nature. He lived both.

David Hawkes (1923–2009) was for many years a professor of Chinese and later a research fellow at Oxford University. His translations included the second-century anthology The Songs of the South and a magisterial multivolume version of Cao Xueqin’s eighteenth-century novel, The Story of the Stone (The Dream of the Red Chamber), considered by many to be the greatest translation into English of Chinese prose.
Loading...
or
Not Currently Available for Direct Purchase