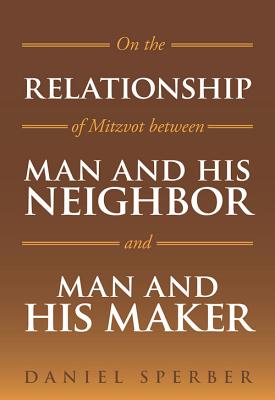 This study seeks to examine the relationship between the two major categories of commandments (mitzvot): ritual commands (between man and his Maker) and social interpersonal commands (between man and his neighbor). It is argued here that when there is a clash between these two categories, and one cannot carry out both, the interpersonal mitzvot almost always override those of a ritual nature. Different scenarios from a broad spectrum of Jewish law are cited to prove this contention, and the conclusion is underscored through the examination of the behavior and rulings of several leading Jewish legal authorities. Finally, the implications of this conclusion and their impact on religious educational direction and rationale are also discussed.

Daniel Sperber is a leading scholar of Jewish law, customs, and ethics. He has taught in the Talmud department of Bar-Ilan University, was the dean of the faculty of Jewish studies, and serves as the president of the Jesselson Institute for Advanced Torah Studies. The incumbent of the Milan Roven Chair of Talmudic Research, he received the Israel Prize in 1992 for his research in Talmud and the history of Jewish customs, and served as the chairman of the Council for Religious Education at the Israel Ministry of Education for a decade. He has published 30 books—including a well-known eight-volume series, Minhagei Yisrael, on the history of Jewish customs—and more than 400 articles on the subjects of Talmudic and Jewish socioeconomic history, law and customs, classical philology, and Jewish art.