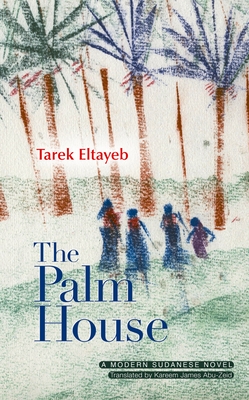 After coming to Vienna from Sudan to win a better life for himself, Hamza struggles to escape from the margins of society and the stigma of the immigrant. Following several years of hardship, his fortunes begin to change when he meets Sandra, a young Austrian woman, who shows him the Palm House. In this famous Viennese greenhouse, the frost of Hamza's heart begins to thaw, and he slowly opens himself to Sandra, revealing his bitter yet beautiful past in Sudan and beyond. This masterful novel draws on the 1001 Nights as well as Sudanese folk traditions, and demonstrates the remarkable power of storytelling to overcome even the most dire circumstances. Critically acclaimed across the Arab world, this novel can be read on its own, or as a sequel to Eltayeb's first novel, Cities without Palms (AUC Press, 2009).

Tarek Eltayeb was born to Sudanese parents in Cairo in 1959, and has lived in Vienna since 1984. He studied at the Institute for Economic Philosophy at Vienna's University of Economics, and currently teaches at three Austrian universities. He has published two novels, two collections of short stories, five collections of poetry, one play, and an autobiography. His works have been translated into German, English, Italian, French, Spanish, Macedonian, Romanian, and Serbian. He is a faculty member of the International Writing Program at the University of Iowa. He received the Elias Cannetti Fellowship of the City of Vienna in 2005 and the International Grand Prize for Poetry at the 2007 Curtea de Argeş Festival in Romania. In 2008, he was appointed Austrian Ambassador for the European Year for Intercultural Dialogue. In the same year, he received the Decoration of Honor for Services to the Republic of Austria. His first novel, Cities without Palms, was published in English translation by the AUC Press in 2009. Further information about his life and work can be found at www.eltayeb.at. Kareem James Abu-Zeid is the translator of Tarek Eltayeb's Cities without Palms (AUC Press, 2009), for which he was runner-up in the 2010 Saif Ghobash-Banipal Prize for Arabic Literary Translation.
or
Not Currently Available for Direct Purchase
Copyright © 2020 American Booksellers Association