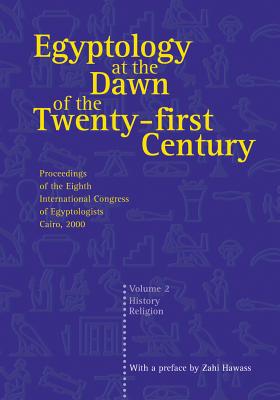 Egyptology at the Dawn of the Twenty-First Century

Proceedings of the Eighth International Congress of Egyptologists, Cairo, 2000: V. 2

This comprehensive three-volume set marks the publication of the proceedings of the Eighth International Congress of Egyptologists, held in Cairo in 2000, the largest Congress since the inaugural meeting in 1979. Organized thematically to reflect the breadth and depth of the material presented at this event, these papers provide a survey of current Egyptological research at the dawn of the twenty-first century. The proceedings include the eight Millennium Debates led by esteemed Egyptologists, addressing key issues in the field, as well as nearly every paper presented at the Congress. The 275 papers cover the whole spectrum of Egyptological research. Grouped under the themes of archaeology, history, religion, language, conservation, and museology, and written in English, French, and German, these contributions together form the most comprehensive picture of Egyptology today.

Zahi Hawass is director-general of the Giza Pyramids and Saqqara. He is the author of The Secrets of the Sphinx (AUC Press, 1998), Silent Images: Women in Pharaonic Egypt (AUC Press, 1999) and The Valley of the Golden Mummies (AUC Press, 2000). Lyla Pinch Brock is an archaeologist specializing in epigraphy who has lived and worked in Egypt since 1989. She is the Assistant Director of the Tell Borg Project and Co-Director of the Theban Tombs Project for the Royal Ontario Museum. She is also the illustrator of The Shipwrecked Sailor (AUC Press, 1998).
Loading...
or
Not Currently Available for Direct Purchase