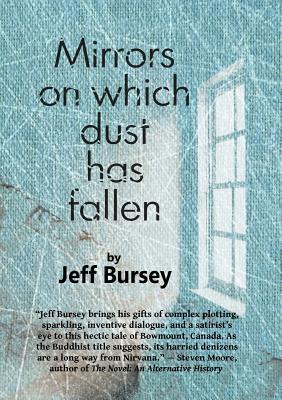 Mirrors on which dust has fallen

Set against a backdrop of public scandal and private dilemma, Mirrors on which dust has fallen presents the quotidian concerns of the average and the not-so-average inhabitants of the fictitious Bowmount, the province featured in Bursey's precursor Verbatim: A Novel. The varied cast of characters examine and defend their spiritual beliefs, from God to evolution; their views on art, as painting battles photography for supremacy; and their sexuality, from confusion to pagan flagrancy. While Verbatim depicts the politics of the elected, Mirrors on which dust has fallen reveals the motives of the electorate, using pitch-perfect dialogue interjected with sly media snippets and elegant, subtle prose, to paint a darkly humorous and deeply telling tale of the late twentieth century in Canada.

"The writing is bawdy, heady, profane, often funny, and full of energy. Fans of Bursey's distinctive first publication, Verbatim: A Novel, will be pleased, as will readers in search of something punchy and new-fangled." -- Joan Sullivan, The Telegram

"Mirrors on which dust has fallen is] an explosively unconventional, deeply disturbing, and relentlessly original work. . . . He is equally comfortable writing about the logistics of clothing wholesalers and the challenges of running a small radio station as he is about the quotidian detail of Catholic ceremonies and the grit needed to keep a seedy pub afloat." -- Mark Sampson, Numero Cinq

"I felt like I was looking at swarming bacteria in a petri dish, everything felt so up close and I was so deep into it. I had to put the book down in order to gain sufficient distance to see the relationships of everyone intertwined in this microcosm, to feel the outlines of the story again. . . . It's a really unique and unusual novel, quite unlike anything else I've read." -- Victoria Best, Litlove: Tales from the Reading Room