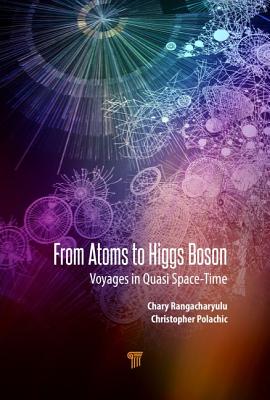 From Atoms to Higgs Bosons (Hardcover)

The announcement in 2012 that the Higgs boson had been discovered was understood as a watershed moment for the Standard Model of particle physics. It was deemed a triumphant event in the reductionist quest that had begun centuries ago with the ancient Greek natural philosophers. Physicists basked in the satisfaction of explaining to the world that the ultimate cause of mass in our universe had been unveiled at CERN, Switzerland. The Standard Model of particle physics is now understood by many to have arrived at a satisfactory description of entities and interactions on the smallest physical scales: elementary quarks, leptons, and intermediary gauge bosons residing within a four-dimensional spacetime continuum.

Throughout the historical journey of reductionist physics, mathematics has played an increasingly dominant role. Indeed, abstract mathematics has now become indispensable in guiding our discovery of the physical world. Elementary particles are endowed with abstract existence in accordance with their appearance in complicated equations. Heisenberg's uncertainty principle, originally intended to estimate practical measurement uncertainties, now bequeaths a numerical fuzziness to the structure of reality. Particle physicists have borrowed effective mathematical tools originally invented and employed by condensed matter physicists to approximate the complex structures and dynamics of solids and liquids and bestowed on them the authority to define basic physical reality. The discovery of the Higgs boson was a result of these kinds of strategies, used by particle physicists to take the latest steps on the reductionist quest.

This book offers a constructive critique of the modern orthodoxy into which all aspiring young physicists are now trained, that the ever-evolving mathematical models of modern physics are leading us toward a truer understanding of the real physical world. The authors propose that among modern physicists, physical realism has been largely replaced--in actual practice--by quasirealism, a problematic philosophical approach that interprets the statements of abstract, effective mathematical models as providing direct information about reality. History may judge that physics in the twentieth century, despite its seeming successes, involved a profound deviation from the historical reductionist voyage to fathom the mysteries of the physical universe.

Chary Rangacharyulu is professor in the Department of Physics and Engineering Physics at the University of Saskatchewan, Canada. He has been teaching diverse topics of physics and engineering physics for nearly 35 years and has published over 200 research articles. His worldwide science outreach activities have won him several awards and honors, including election as a fellow of the American Physical Society. His current research areas are nuclear physics, particle physics, medical isotopes, and food irradiation. Christopher Polachic is assistant professor of physics at Williams Baptist University, Arkansas, USA. He earned his PhD in theoretical condensed matter physics from the University of Alberta, Canada. His current research interests include the philosophy and history of science and the contemporary dialogue between science and religion.
or
Buy Here
(This book is on backorder)
Copyright © 2020 American Booksellers Association