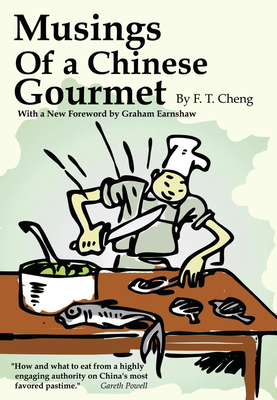 Musings of a Chinese Gourmet

This book, written in the early 1950s by a former Chinese ambassador to London, is a cultured and entertaining view of the gastronomic side of Chinese life. F.T. Cheng sets out to show Westerners that there was a lot more to Chinese food culture than chop suey. It is a wonderful reminder of the richness and depth of Chinese culture from a man who also completely understood the West.

Praise For Musings of a Chinese Gourmet…

"Watching the ferocious scramble for lunch in China’s cities, his words are as true today as they were half a century ago."  —Malcolm Moore, Daily Telegraph

F.T. Cheng, the author of this book, was a member of the old Chinese elite. He was the Chinese ambassador to London and an intellectual who spoke English with the same old world charm as he no doubt did Chinese. He was also a gourmet, and in the early 1950s, he decided to write his "musings" on the theme of Chinese food and drink to educate Westerners about his homeland and its colorful cuisine. “Musings of A Chinese Gourmet” was first published in 1954.
Loading...
or
Not Currently Available for Direct Purchase