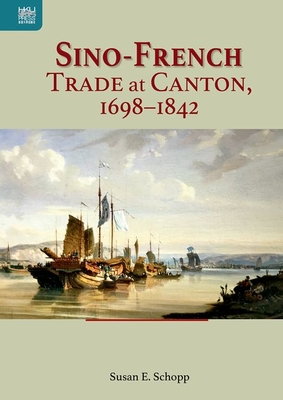 Sino-French Trade at Canton, 1698–1842 presents a rare and lively view of the French experience at Canton, and calls for a reappraisal of France’s role in that trade. France was one of the two most important Western powers in the eighteenth century, and was home to one of the three major European East India companies. Yet the nation is woefully underrepresented in Canton trade scholarship. Susan E. Schopp rescues the French from the sidelines, showing that they exerted a presence that, though closely watched by their rivals, is today largely unrecognized. Their contributions were diverse, ranging from finding new sea routes to inspiring the renovation of hong façades. Consequently, to ignore the French, or to dismiss them as simply “also-rans,” results in a skewed perception of the Canton system. Schopp also demonstrates that while the most distinctive aspect of the French model of company trade was the dominant role of the state—indeed, the French East India Company has been memorably described as a “Versailles of trade”—this did not rule out a place for legitimate, and sometimes surprising, participation by the private sector. On the contrary: France’s commercial relations with China were inaugurated by private traders, and the popularity of the Canton trade spurred the eventual demise of the company model. Backed up by extensive archival work, Schopp’s work demonstrates a remarkable understanding of the Sino-European trade, and her book reveals an unparalleled passion for the role of seamanship in history.

Susan E. Schopp, PhD, is a historian with an earlier background in art history. She came to the Canton trade via a shipwreck; in 1997 she identified the wreck of the English East India Company’s Earl Temple, a former French vessel that was captured by the English during the Seven Years’ War. She is also a crew member of Friendship of Salem, a full-size, fully operational replica of the 1797 American East Indiaman Friendship. Her research interests include not only the Sino-French experience but also the various watercraft of the Canton trade and the representation of that trade in art.
Loading...
or
Not Currently Available for Direct Purchase