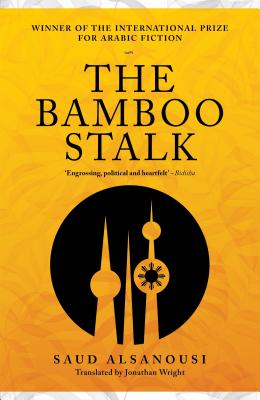 Josephine Mendoza escapes poverty by coming to Kuwait from the Philippines to work as a maid, where she meets Rashid, an idealistic only son with literary aspirations. Josephine, with all the wide-eyed naivety of youth, believes she has found true love. But when she becomes pregnant, and with the rumble of war growing ever louder, Rashid bows to family and social pressure, and sends her back home with her baby son, Jose.

Brought up struggling with his dual identity, Jose clings to the hope of returning to his father's country when he is eighteen. He is ill-prepared to plunge headfirst into a world where the fear of tyrants and dictators is nothing compared to the fear of 'what will people say.' And with a Filipino face, a Kuwaiti passport, an Arab surname and a Christian first name, will his father's country welcome him?

"The Bamboo Stalk" takes an unflinching look at the lives of foreign workers in Arab countries and confronts the universal problems of identity, race and religion.

Saud Alsanousi is a Kuwaiti novelist and journalist, whose work has appeared in Al-Watan newspaper and Al-Arabi. He writes for Al-Qabas newspaper and lives in Kuwait City.Jonathan Wright has translated several novels, two of which won the 2013 Banipal Prize for Arabic Literary Translation and the 2014 Independent Foreign Fiction Prize.
Loading...
or
Not Currently Available for Direct Purchase