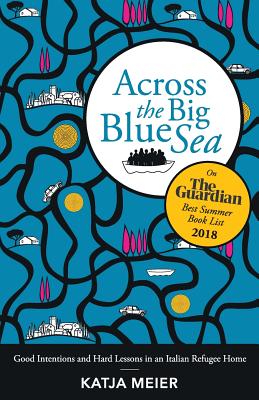 Across the Big Blue Sea

Good Intentions and Hard Lessons in an Italian Refugee Home

"Perfectly done, with so much humor and outrage both, Across the Big Blue Sea says more than most anything I've read about the 'refugee crisis' and how the system is set up to fail, even the best-intentioned and most well-meaning (without shying away from the fact that plenty of people involved are neither)." - Lauren Collins, The New Yorker staff writer

Thousands of people risk crossing the treacherous waters of the Mediterranean Sea each year. But what happens if they make it to the other side?

On a hot July day, the Italian coast guard rescues five young Nigerian women in a battered boat. At the same time, Katja Meier is put in charge of a small refugee home in the Tuscan countryside. But a quaint hilltop town with an aged population wasn't exactly where the five young women had hoped to land.

Good intentions quickly get lost in cultural misunderstandings and the shadows of Italy's criminal underworld as an ingenuous improvised social worker confronts hard truths about disorganized charities, insurmountable bureaucracy and prostitution on cypress-lined roads. How can she make a difference when Nigerian girls keep disappearing?

In this searingly honest and thought-provoking memoir, leavened with just enough wry humor, Katja Meier shares the hard lessons she discovered on the steepest of learning curves among Tuscany's seemingly idyllic golden hills.