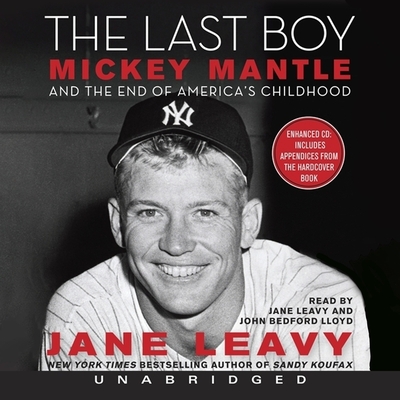 The acclaimed author of the New York Times bestseller Sandy Koufax returns with the biography of one of baseball's greatest and most complex legends, Yankee outfielder Mickey Mantle.Drawing on more than 500 interviews with friends and family, as well as teammates and opponents from every level of baseball, New York Times bestselling author Jane Leavy delivers the definitive account of one of the biggest talents and most tragic figures ever to play the game.Meticulously reported and elegantly written, The Last Boy weaves together the author's own memories of Mantle with stories and reminiscences from on and off the field of a man who led the Yankees to seven world championships, was voted the American League's Most Valuable Player three times, won the Triple Crown in 1956, and dueled teammate Roger Maris in a thrilling 1961 chase for the single season home-run record--all while battling crippling injuries and a lifelong drinking problem.As she did so indelibly in her acclaimed biography of Sandy Koufax, Leavy goes beyond the myth and the hyperbole to to reveal the man behind "The Mick" and his hold on a generation of adoring fans.