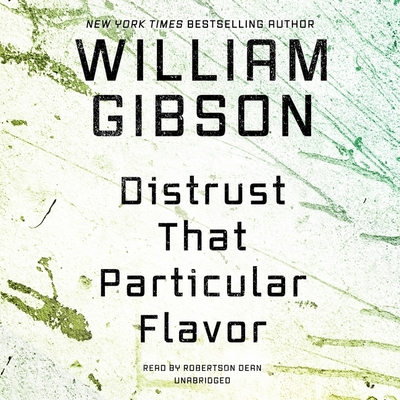 William Gibson is known primarily as a novelist, with his work ranging from his groundbreaking first novel, Neuromancer, to his more recent contemporary bestsellers Pattern Recognition, Spook Country, and Zero History. During those nearly thirty years, though, Gibson has been sought out by widely varying publications for his insights into contemporary culture.

Wired magazine sent him to Singapore to report on one of the world's most buttoned-up states. The New York Times Magazine asked him to describe what was wrong with the internet. Rolling Stone published his essay on the ways our lives are all soundtracked by the music and the culture around us. And in a speech at the 2010 Book Expo, he memorably described the interactive relationship between writer and reader.

Now these essays and articles are collected here together, with some in print for the first time. In addition, Distrust That Particular Flavor includes journalism from small publishers, online sources, and magazines no longer in existence.

This volume is essential listening for any lover of William Gibson's novels. Distrust That Particular Flavor offers listeners a privileged view into the mind of a writer whose thinking has shaped not only a generation of writers but our entire culture.