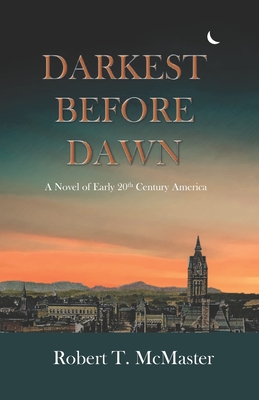 April 10, 1919. The war in Europe, the Great War, the War to End All Wars, is over-America and her allies have defeated the German forces. The USS Mongolia arrives in Boston carrying nearly 5,000 soldiers and sailors returning from France. Thousands are gathered on Commonwealth Pier to welcome the returning doughboys, dancing, waving flags, singing, and celebrating the safe return of their loved ones. But war changes things. It changes nations, and it changes people, both those who fought and those who waited anxiously back home. One soldier among the thousands arriving in Boston on this day is not joining in the celebrations. He is a young man from Holyoke, Massachusetts. He enlisted out of a sense of duty to his nation, little knowing the pain, the hurt he would suffer. His wounds are not those of gunshots or mustard gas or influenza, they are wounds of the heart and the soul, and they are deep. In Darkest Before Dawn, Book 4 of the Trolley Days Series, Massachusetts author Robert T. McMaster traces the lives of four young people growing up in a time of turmoil and wrenching change for their country, their hometown, and themselves.

Robert T. McMaster grew up in Southbridge, Massachusetts, a New England mill town. He holds a B.A. from Clark University and graduate degrees from Boston College, Smith College, and the University of Massachusetts. He taught biology at Holyoke Community College in Massachusetts from 1994 to 2014. His parents’ reminiscences of growing up in early 20th century America were the inspiration for four novels, Trolley Days (2012), The Dyeing Room (2014), Noah’s Raven (2017), and Darkest Before Dawn (2022). He is also author of a biography, All the Light Here Comes from Above: The Life and Legacy of Edward Hitchcock (2021).
Loading...
or support indie stores by buying on