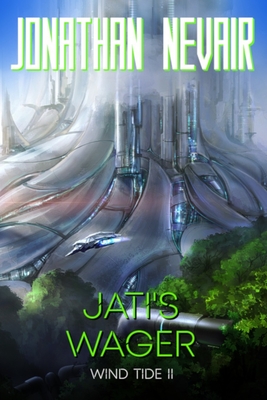 A space opera heist brimming with action, twists, and turns that doubles as a story of personal growth, mentorship, and sacrifice.

Ailo is a streetwise teen surviving alone on the remote moonbase, Tarkassi 9. She wants nothing more than to flee into the wider world of the Arm. When her chance arrives, she makes it no farther than the first ship out of the system. That's where Jati, the Patent War veteran and general fighting the Monopolies gives her a second chance. It's an unlikely partnership, but Ailo's rogue status is just what Jati's People's Army needs to drive the final spike of victory into a weakening Garissian Council. A team of experts assembles and hope rests on Ailo's skill, stealth, and tenacity to pull off the impossible. It's a wild gambit, and a moral code may need to be bent, or broken, to achieve success. When an internal shadow rises, casting doubt on their plans, Ailo and Jati are forced to weigh the cost of revenge against honor and justice. Jati's Wager, a space opera inspired by the myths of the Trojan War.