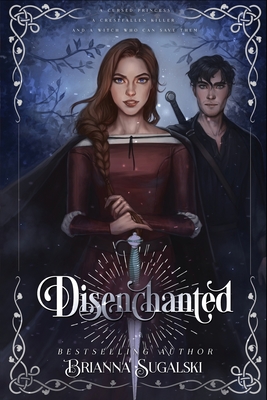 "Girl meets boy, girl turns out to be heir to the throne, boy turns out to be a centuries-old vampire...tale as old as time, right? Wrong. Sure, Disenchanted delivers all the explosive romantic energy you'd expect when a woman on a mission to save her kingdom gets mixed up with a reluctant bad boy bodyguard. But, Brianna Sugalski's magical pen delivers so much more: adventure, intrigue, humor and the kind of deep and diverse world building that leaves you eager for more."

-Sean Gibson, bestselling author of The Part About the Dragon Was (Mostly) True and The Camelot Shadow

A Breton princess at the peak of the French Renaissance, Lilac lives like a prisoner in her parents' castle after a wicked secret is revealed on the eve of her tenth birthday soir e. Years later, her coronation ceremony looms, and between the riotous townsfolk and scheming nobleman bent on snatching the throne, Lilac prepares for the worst...

Until a mysterious letter arrives from The Witch of Lupine Grotto, detailing a curious offer to cure her darkness forever. Lilac begrudgingly trades her coronet for a cloak and ventures into the forest Broc liande in pursuit of the impious enchantress at the edge of town.

With only the protection of an inherited dagger and the unsolicited help of a sardonic stranger who inserts himself in her quest, she must traverse Broc liande and return in time to claim her rightful place as monarch.

This is the story of a cursed princess,

The town that wants them to burn,

And the witch that can save them both.