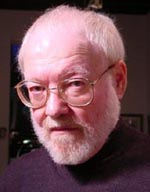 Daniel Quinn was born in Omaha, Nebraska in 1935. He is best known for his book, Ishmael, which won the Turner Tomorrow Fellowship, established to encourage authors to seek "creative and positive solutions to global problems." A frequent speaker at college campuses and social forums, Quinn's works encourage readers to rethink humanity's place in the world. His novel, After Dachau, raises further questions about history, personal identity, and cultural assumptions. His latest book is The Man Who Grew Young.

BookSense.com: Why did you choose an artist as one of the main characters in After Dachau?

Daniel Quinn: It's really the stories that do the choosing and not the personal tastes of the author. In this case, the story called for a readily identifiable New York milieu that was closely tied to the period in which the heroine flourished -- the late 1940s and early 1950s -- so the explosion of abstract expressionism fit the bill perfectly. Other choices might have been available, but I happen to be interested in abstract expressionism anyway, and the research involved was not arduous. The choice carried many other benefits as well. For example, having progressed from model to painter during that period, the heroine could resume this career without interruption in the narrative framework of this novel.

Why did you choose a different style of writing for After Dachau?

Each of the narrators of my books has his or her own voice (Alan Lomax's being edgy and bitter, Julie Gerchak's being exuberant and whimsical, Jared Osborne's being grave and judicious, and Jason Tull's being modest and charming), but they all tell their stories in a direct, economical, and unaffected way (which is what I think of as my "style of writing"). Though After Dachau is a different kind of novel -- mainstream, as opposed to a "novel of education" -- I'm not aware of having adopted a different style of writing for it.

Your previous books examine how our culture, specifically a consumerist culture, teaches us not to question our lifestyle, but to accept it as the natural evolution of civilization. Is After Dachau similar to your previous books? How is it different from the Ishmael series?

Just like us, the victors of the world of After Dachau naturally get to write the history books, which present a story as conveniently distorted as our own. In all my novels I challenge the victors' version of history, and this is what makes After Dachau similar to my previous books. What makes it different is the fact that there is no central teacher to help the characters discover the distortions of the victors' history; the characters must discover for themselves how their history has been falsified.

In Ishmael, My Ishmael, and The Story of B, one character teaches another character throughout the book. Was it difficult to write After Dachau, where none of the characters have the answers?

What was difficult was writing it so that readers of the story wouldn't have the answers before the characters did!

No. The Leaver/Taker dichotomy emerges only if you look at human history as a whole. After Dachau focuses on a relatively brief period of human history.

What would you change about the way world history is taught in schools?

When you mentioned world history, I initially thought you were talking about the history of the world, but of course this isn't what the term means in the school setting. In the school setting, world history is fundamentally the history of our culture. I would replace this with a true "world history," beginning some five billion years ago, so that children would have a chance of understanding where we fit in here. As it is, they finish school with only a very hazy idea of where we came from and how we reached this point. (In The Story of B I refer to this as the Great Forgetting.)

Do you stay current on environmental research?

Everything I teach on these matters is really very, very elementary and fundamental, which means it isn't being overthrown and rethought every week. To reach for a parallel in another science, what I'm teaching in these matters is about equivalent to the fact that the earth revolves around the sun. Research on the cutting edge of cosmology may shake up our timetable for the Big Bang every week, but it never puts into question the fact that the earth revolves around the sun. Although I keep up in a general way, there is no research that is going to change the fact that humans are completely dependent on the rest of this planet's biological community, so I'm not checking to see if I've somehow been rendered obsolete.

How did you learn the facts about population and culture you present in Ishmael?

There's nothing at all special about the facts I present about population and culture; they're readily available in any public library. What I bring to my books is not a different SET of facts but rather a different way of LOOKING at the facts (and this is just a product of my own unwillingness to receive the received wisdom of our culture).

On the book tour for After Dachau, you chose to visit only independent bookstores. Why independents?

In the rivalry between independents and chains, my sympathy is (I'd say pretty naturally) with the independents. This is my answer on what you might call a policy level. On a personal level, I've found that the independents are much more interested in my work (and generally more friendly and caring as well). In the chains, you sometimes have the feeling that you need to explain to the store personnel that those things on the shelves are not boxes of cereal.

One of your messages is that our environmental problems can not be solved by "old minds working with old programs." Solving the problems require "new minds, without any programs." Do you still feel this way, and can you elaborate on what this means? Can you give an example?

In The Story of B I put it this way: If the world is saved, it will not be by old minds with new programs but by new minds with no programs at all (and I do indeed still feel this way). It may help to think of it this way: No matter how many new technologies you have, you can't put a man on the moon and bring him back if you still cling to the medieval belief that the sun revolves around the earth. All the technologies in the world won't do it if that false belief is in place. In the same way, no matter how many new laws you pass (or programs you put in place), we're not going to survive here if we go on clinging to the medieval belief that humans belong to an order of being that is separate from and superior to the rest of the living community. All the laws and programs in the world won't do it if that false belief remains in place. It is this absurd belief that enables us to view with equanimity the fact that (by conservative estimate) as many as 200 species are becoming extinct EVERY DAY because of our impact on the world. This belief enables us to imagine that this is okay, because humans are SEPARATE from those 200 species -- they have nothing to do with us. We're steadily destroying the biological infrastructure that sustains us, but people don't get worried about it because they continue to imagine (just like people in the ninth century) that human life is somehow independent of that infrastructure. Nothing threatens human survival more than this archaic (and totally mythical) mode of thought.

Your books don't give solutions to ecological problems, but instead try to inspire solutions. Are you excited about any current ideas, solutions, or people that are solving environmental problems?

I don't think in terms of solving environmental problems but rather in terms of changing minds -- and I'm very heartened by what I see. More than one teacher has told me, "I don't use any of your books in my classes, but reading your books has changed the WAY I teach" -- and that's what counts. When people's mental models begin to change, the results are not immediately spectacular, but results do eventually arrive -- very suddenly and spectacularly. I sincerely believe we're on the brink of a second Renaissance.

In an older version of Ishmael you published a P.O. Box to which people could send you letters. Now you have a website, www.ishmael.com, to share ideas and allow readers to communicate with each other. How else has the Internet affected the spread of your ideas? Has the Internet influenced your ideas at all?

Your book, Beyond Civilization, asks if it's possible to "go further" than our current civilization. Any comments on the use of technology, a central part of Taker culture today, to "go further"?

Technology has made the earth a paradise for products. By this I mean that, because of technology, things just get better and better and better -- for products. Or, to put it yet another way, if products could talk, they would have nothing at all to complain about: they live in product heaven. This isn't the case for US, however. While things get better for products every day, things get WORSE for us every day -- and this isn't a trend that's going to change. The era I grew up in was not "the good old days" by any means, but it's quite amazing how much worse things are for people today than they were 50 years ago. Technology can be counted on to go on making things better for PRODUCTS, but people need to head in a new direction to begin making things better for PEOPLE -- and that's the direction I was exploring in Beyond Civilization.

If you taught a course on Ishmael, what other texts would be on the reading list?

What's next? What are your upcoming projects, books or otherwise?

In the fall, [my publisher] Context Books will be bringing out The Man Who Grew Young, a graphic novel that has been in the works for four years, with artwork by Emmy-award nominee Tim Eldred. A year later Context will bring out another novel that has been incubating for a decade. In fact, I have so many books in the pipeline at this point that I plan to take off a year to work on screenplays for The Story of B and After Dachau.

"A suspenseful plot involving an alternative end to WW II and the mind-bending implications of a society built on Nazism, reincarnated souls, paranormal research, and an unforgettable climax will leave readers unable to put the book down until the final page. This deserves to be read and debated, and it is an excellent choice for book discussion groups."
-- Linda Barrett Knopp, Malaprop's Bookstore and Cafe, Asheville, NC

The Man Who Grew Young, illustrated by Tim Eldred
"This matches the intense, thought-provoking writing of Quinn's Ishmael and After Dachua. I couldn't stop until I finished this illustrated novel."