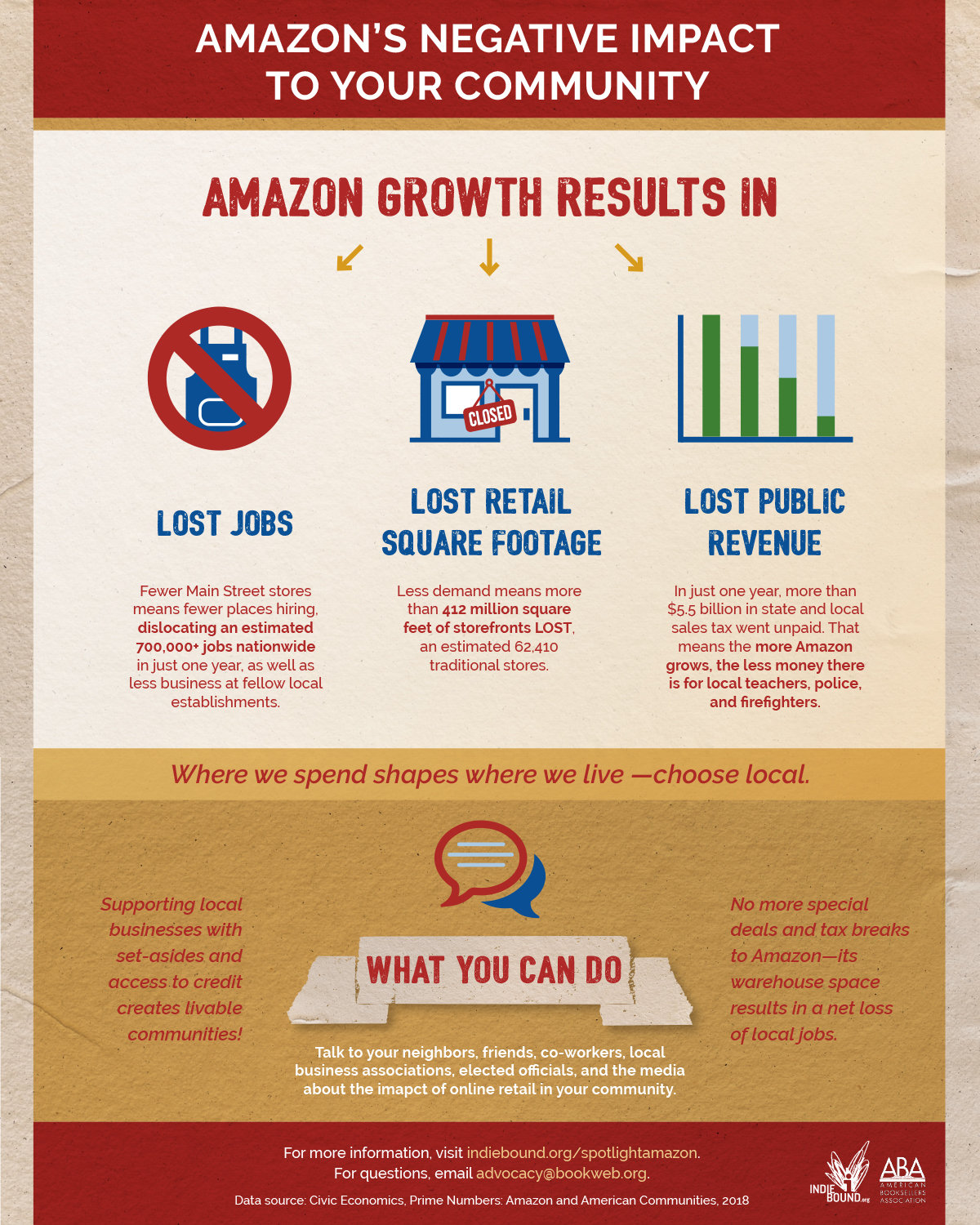 The True Cost of Amazon Revealed

A recent report from economic analysis firm Civic Economics says that sales by Amazon and third-party vendors — in 2018 alone — accounted for $5.5 to $7 billion in uncollected sales tax. The report also estimates that in just one year Amazon sales displaced the equivalent of 540 million square feet of retail space and 900,000 retail jobs.

That lost revenue would have funded public works, public safety, and public education.

Prime Numbers: Amazon and American Communities was commissioned by the American Booksellers Association. The report concludes that despite the convenience Amazon provides, Americans may not comprehend the nature of the trade-off.

Another recent study, Home Sweet Home: Locals vs. Amazon, demonstrates the significant economic benefit that supporting independent businesses has on local communities. The study, conducted by Civic Economics and commissioned by the North American Retail Hardware Association (NRHA), the Paint and Decorating Retailers Association, and Independent We Stand, specifically compares the impact of conducting business with independent hardware stores versus the sales of hardware and building materials through Amazon. It shows the substantial “local advantage” of indie stores over Amazon in terms of re-circulation of revenue back into the community.

How to Fight Amazon (Before You Turn 29)

Why Independent Bookstores Have Thrived in Spite of Amazon.com

How Amazon's Tightening Grip on the Economy is Stifling Competition, Eroding Jobs and Threatening Communities 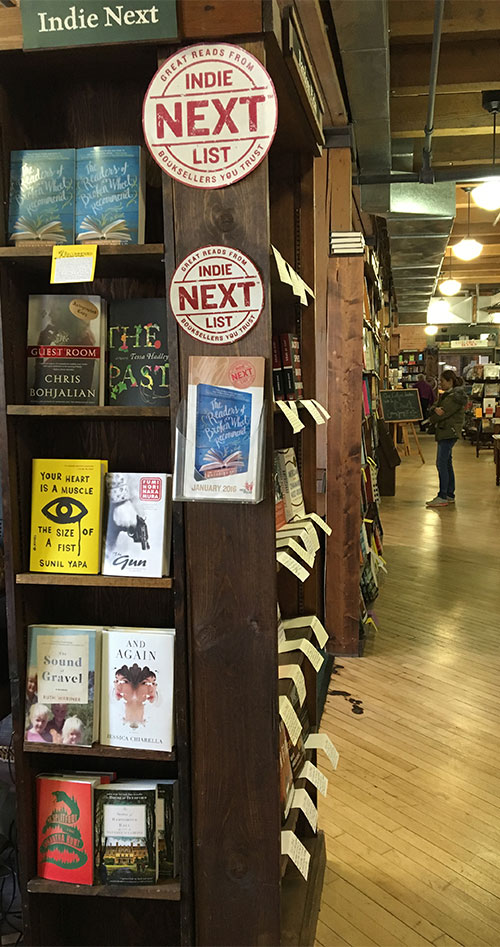 Q: Haven’t independent bookstores all gone out of business?

There has been a renaissance in indie bookselling over the past five years. While not every bookstore or community has seen this growth, the national trends are clear: New stores are opening. There has been a 35 percent increase in the number of independent bookstore locations since 2009, existing stores are opening in new locations, and established stores are being successfully sold to new owners, often younger owners as a new generation of booksellers enters the industry.

Importantly, too, book sales are up across the indie channel. There have been consistent, modest sales gains for four years, and sales were up approximately eight percent in 2015.

All of this is a result of the fact that indie booksellers are a resilient and entrepreneurial group, offering customers a unique opportunity to discover great new titles and a closer connection with authors, fellow readers, and their community.

Q: But what about other indie businesses?

Without a doubt, such mega-companies such as Walmart and Amazon have continued to grow, and competition remains fierce, but in contrast to the grim reports of the 1990s and early 2000s, the rise of the localism movement and other factors has resulted in gains for indie businesses.

Q: I hear a lot about localism, but is it all just hype?

Q: That sounds great, but do you have facts to back that up?

Another great indicator is the annual post-holiday survey of independent businesses conducted by the national group Advocates for Independent Business. The national survey has reported positive growth numbers for the last nine years. The most recent survey–which gathered data from more than 3,200 businesses–showed brisk sales in 2015, with revenue growing at an average of 6.6 percent. Among indie retailers, revenue increased 4.7 percent, including a 3.1 percent increase during the holiday season. These indie retailers beat the results of many national chain retailers as well as overall holiday retail sales, which rose only 1.6 percent.

Communities with an active Local First or “buy local” campaign saw revenue growth among indie businesses of 7.4 percent in 2015, compared to 4.2 percent for those in communities without such an initiative. Two-thirds of respondents in cities with active campaigns said they were having a noticeable positive effect on their businesses, with one-third reporting new customers and 40 percent reporting an increase in collaboration and mutual support among local businesses as a result of the initiative.

Amazon has definitely pioneered online commerce and has excelled at providing a very engaging customer experience and executing the complex supply-chain steps of delivery purchases to consumers. But its success is not the result of that alone. Amazon has also greatly benefited from many years of resolute avoidance of sales tax collection on purchases, giving it an inequitable and potent strategic pricing advantage over bricks-and-mortar retailers that have complied with sales tax requirements. A recent study found that households in states where Amazon collects sales tax reduced their Amazon purchases by eight percent after sales taxes collection was implemented. The effect is more pronounced for large purchases, where the decline was 11 percent. This advantage is slowly coming to an end, but, over the years, it has cost states and cities billions of dollars in lost revenue, while forcing local retailers to compete with one hand tied behind their backs.

In addition, Amazon has demanded special tax rebates and subsidies to locate distribution centers in cities and towns across the nation. This despite the fact that Amazon destroys more jobs than it creates. Bricks-and-mortar retailers employ 47 people for every $10 million in sales, according to an analysis by the Institute for Local Self Reliance of U.S. Census data. (If you exclude chains and look only at independent retailers, the figure is even higher — 57 jobs.) But Amazon employs only 14 people per $10 million in revenue.

Q: I understand why Amazon’s growth has been tough on bricks-and-mortar businesses, but why is it bad for local communities?

A: Local communities prosper and thrive on local business.

A recent study commissioned by ABA from the research group Civic Economics clearly shows that what’s good for Amazon is not good for the overwhelming number of communities in the U.S. The study revealed that Amazon’s total nationwide sales tax gap in 2014 is an estimated $625 million, and the displacement of retail from local communities to the Internet exacts a large (and growing) cost of approximately $420 million in property taxes annually. This results in a total of more than $1 billion in revenue lost to state and local governments in just one year, a huge shortfall in the monies needed to support schools, libraries, first responders, and other key services.

Q: Are locally owned businesses better for my community?

A: Locally owned businesses are far better at creating long-lasting and healthy communities.

Several case studies have found that about $52 of every $100 you spend at locally owned stores stays in your community, supporting other businesses and jobs. (Local retailers buy many goods and services, like printing and accounting, from other local businesses; their employees spend most of their earnings locally; and so on.) That far outstrips the performance of Amazon.

A: Yes, but the overall net effects on job creation are not positive.

Here's What You Just Did

Here's What Amazon Just Did

A selection of readings and resources concerning Amazon are available from the American Booksellers Association.